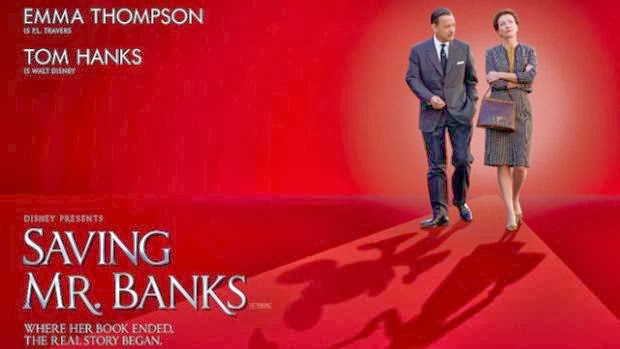 For all those who have grown up watching the magic of cinema, Saving Mr. Banks is an absolute treat. Superbly written, it is witty, smart, emotional, nostalgic, with an old world charm and add to it, the top class production values and some exceptionally good acting from Emma Thompson and Tom Hanks.

The story of Mary Poppins and the Disney film that came out in 1964 is quite popular but what is not so well known is the fact that Walt Disney persuaded P.L. Travers the author for twenty years to secure the rights to make the film. Saving Mr. Banks is all about that persuasion through which we also learn of the authors’ background and her inspiration for one of the most popular characters among children.
The film opens with P.L Travers (Thompson) trip to America to meet Walt Disney (Hanks) who wanted to make the film. Travers was a very interesting person and extremely opinionated giving Walt and his team the cold shoulder at every possible opportunity. The flashbacks beautifully juxtaposed tell us about her childhood and her father (Colin Farell) who served as an inspiration for Mr. Banks in the story.

Travers just doesn’t give in to the ideas of the Sherman brothers (who composer/lyricists for the Mary Poppins film) and Don DaGradi (screenplay writer) and she is very hard to please. When told that Dick Van Dyke is considered for the role of Bert because he is ‘great’ she is aghast - “Olivier is great and so is Burton and Guinness but Van Dyke is definitely not!”

She is also the type who will walk into a bar and when asked what she would like her reply is “A pot of tea, if you please” But gradually we also learn why is reluctant to give in “Disappointments are to the soul what thunder is to the air” she says pensively. No wonder she carries a statue of Buddha even when she travels.

A fair share of the film should also go to the writers the two ladies Kelly Marcel and Sue
Smith, who have written the script which hardly has a single dull moment. The sharp editing and the music score by Thomas Newman also contribute immensely.

Of the supporting cast, Paul Giamatti as the chauffer, Jason Schwartzman and B.J Novak (of Inglourious Basterds fame) fit the bill. The ever-reliable Tom Hanks looks the part of Walt Disney and fits in his shoes commendably. Emma Thompson steals the show with her savoir-faire, displaying a range of emotions with equal ease.

Saving Mr. Banks is guaranteed to tug your heart strings, don’t miss it.