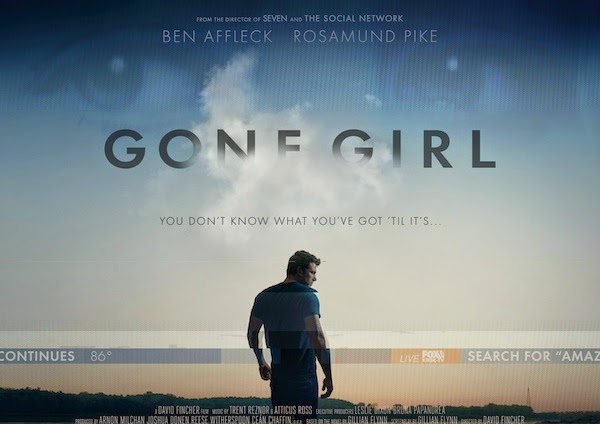 Adapted from the book by Gillian Flynn who has also written the screenplay, Gone Girl is one twisted story and you expect a director like David Fincher to do justice to it and he does. Fincher has made some memorable films like Fight Club, Zodiac, Se7en, The Social Network and the American version of The Girl With The Dragon Tattoo and a plot like this one is right up his street.

The likely hood of coming out after watching the film in one of these three stages is high –Utterly delighted, happy and partly dissatisfied. The more I think about the film, the more inclined I am to move from the second category to the first.

A plot like this that involves mystery and a lot more is not easy to adapt, besides, the story is not just a mystery, there are many more layers like relationships, media trials and Fincher has managed to bring them to the fore admirably.

Those who have read the novel will be aware of the twists and turns but those who haven’t the story is about Nick (Ben Affleck) who, on the morning of their anniversary, discovers that his wife Amy (Rosamund Pike) is missing. They have moved from New York to this relatively smaller town and though there are signs of foul play in the house, Amy’s fate is unknown. Nothing more can be said without giving the plot away.

While the first half is your routine mystery thriller with an edge, it is a completely different proposition later. It is not only about what we see but from whose point of view we see it that’s important and Fincher manipulates (one of the posters of the film is cleverly distorted) the audiences seamlessly without they feeling manipulated. The film uses flashbacks and keeps cutting back and forth gradually revealing what the characters are all about and what stand they take. During times when television can change the perception of just about anything the notion of guilt also becomes flexible.

The winding up process towards the end is not entirely satisfactory and that is perhaps the only flaw that one can find.

It won’t be surprising to see the cast win a few Oscar nods. Ben Affleck has come a long and done a variety of films in his career but this is among his best performances. Rosamund Pike’s career will surely get a boost with this film, she is first rate. Even the supporting cast is superb lead by Carrie Coon as Nick’s twin sister.

All in all, Gone Girl is a highly satisfying experience, refer to the second paragraph if you have any doubts about watching it.

Published in The Navhind Times on 2nd Nov 2014
www.twitter.com/sachinchatte
Posted by Sachin Chatte at 09:42