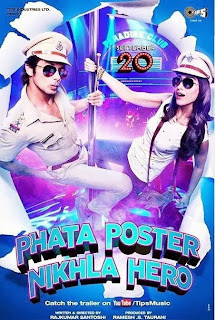 Old But Not Gold

Once upon a time in Mumbai and the rest of India, Raj Kumar Santoshi was a name to reckon with. He did serious films (Damini, Ghayal) and comedy (Andaz Apna Apna) with equal ease. But like most of our directors of that era he has lost his touch. And mind you, that era was only about 20 years ago, many Hollywood directors (Ron Howard for instance) are still going strong for a longer period now. But that is a subject for another day.

Phata Poster Nikhla Hero looks like a film of the 70’s and 80’s – very little logic, lots of melodrama, plenty of songs and a climax that looks like it was written using the Andaz Apna Apna template.

Shahid Kapoor plays Vishwas, a young man who aspires to become a film hero from childhood. But his mother (Padmini Kolhapure) is hell bent on him joining the police force. Am pretty sure even politicians are not so determined to get their children in politics.

So the actor comes to Mumbai and wears the police uniform for a photo shoot. A girl (Ileana D’Cruz) on the streets thinks that he is actually a cop and he kinda likes it that way. He lands a role in a film but when mommy comes to town to see him, he again pretends to be a police officer which leads to more confusion and all that jazz.

The villain is called Napoleon and his sinister project is called white elephant, pretty much like the budget of this film. There is the odd funny line but it all gets negated by silly scenes like “maa ki operation ke liye Rs.10 lakh chahiye”.

Shahid Kapoor tries his best and keeps it lively. Salman Khan also shows up and he wants to go to Raj Kumar Santoshi’s house to audition for Andaz Apna Apna Part 2. If at all that film is realized, I hope Santoshi can do much better than what he has done here.