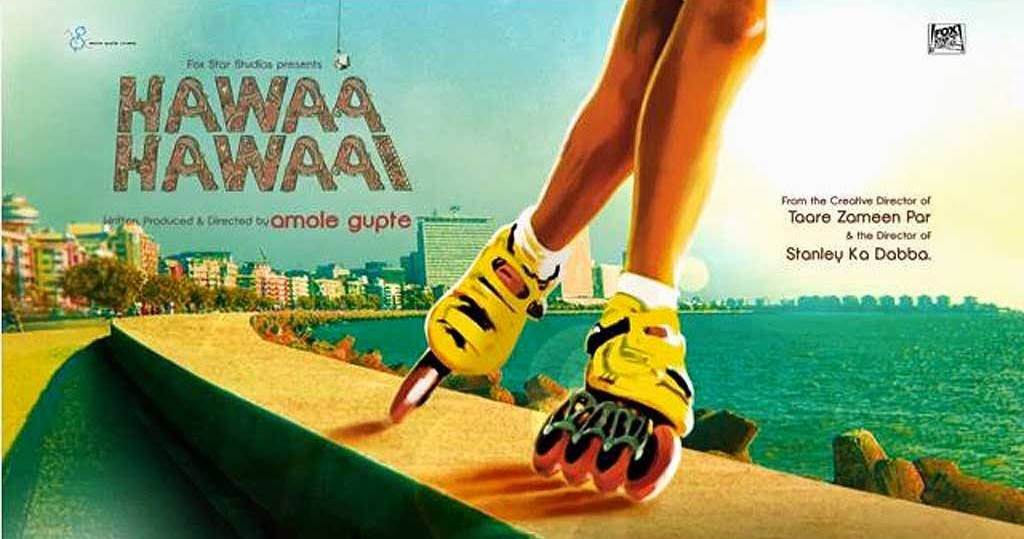 On the heels of the wonderful Stanley Ka Dabba, director Amole Gupte has delivered another winner in the form of Haawa Hawaai, a film that again has a children as a part of its main focus. While the story is very simplistic, it tugs your heart strings and the director also focuses on important social issues like child labor and he does it without being preachy.

Arjun (Partho Gupte, the director’s son) is a young boy who lives in the slums and helps his widow mother (Neha Joshi) make ends meet. He works at a tea stall and in the evenings he watches skaters as the same arena turns into skating ring. Lucky Sir (Saqib Saleem) teaches the kids and before you know it, the little boy wants to learn skating. At the center of his story are his friends, a rag picker, a mechanic, a zari worker and another one who sells flowers at the traffic signal. These kids have got a raw deal in life but that doesn’t stop them from making the best of it.

They get together and ingeniously design a pair of roller blades, dressed like Iron Man, Arjun even manages to grab the teachers attention.  While the film moves on predictable lines from there on, the story about the triumph of an underdog has a zing that will never go away.

Apart from the telling social commentary about child laborers, the director also makes a point about the plight of farmers where Arjun’s father (Makarand Deshpande) becomes a victim.  The screenplay takes a few convenient routes at times and for instance the character of Lucky’s brother, a skating champion turned investment banker, is clichéd.

The film plays heavily on your lachrymal glands and more than once you feel a lump in your throat. One of those moments is a beautifully edited song where they show what the street children are doing rather than what they should be doing in school, like the privileged kids.

At the heart of the film is Arjun and his friends –together, they the steal the show. Maaman Memon, Thirupathi Kushnapelli, Salman Khan, Ashfaque Bismillah Khan have done a terrific job and due credit should also go to the director for extracting such wonderful performances. Saqib Saleem is spot on as the teacher who invests in his students dreams. After Stanley Ka Dabba, Partho Gupte has proved that it was not a flash in the pan. As the central character he is brilliant.

A few dramatic moments notwithstanding, Haawa Hawaai is eminently worth a watch. Get, set, go !

Published in The Navhind Times on 11th May 2014
www.twitter.com/sachinchatte