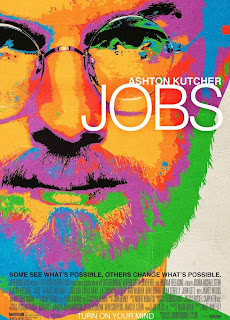 
The world can be divided into two kinds of people – those who use and swear by Apple products and those who don’t, the dice though is strongly loaded in favor of the latter. But there is no denying that at the helm of Apple, Steve Jobs created something very special which almost went on to became a part of people’s persona. Coming to the film, the results are mixed. I was not bored while watching, in fact it kept me interested, but in the end the pay off wasn’t quite exciting.

The film attempts to cramp in a large part of Steve Jobs life, starting from his college days. After doing the odd job, he returns from a trip to India and starts his own enterprise along with his friend Steve Wozniak (Josh Gad) and Apple Computers was born in a garage.

Even after the capital investment by Mike Markkula (Dermot Mulroney), his professional life has its shares of ups and downs. He was dropped from the team that were designing Apple Lisa which later became a big flop but by then Jobs was a part of the Macintosh team which wasn’t particularly successful either. In fact in the mid 80’s Jobs was forced out of Apple only to make a comeback a decade later. The film opens with him introducing the Ipod in 2001 and that’s the last reference to him as far as the chronology is concerned.

One of the facets the films establishes and is widely known, is that Jobs wasn’t the nicest man to be around with but at the same time he was a visionary and had great dedeication to his product. His single goal in life was to create something different that would that people would be able to associate with on a personal level. Needless to say, it was the second innings of his career that made him the legend that he is and since everyone knows that, the film doesn’t dwell on it.

While the film is eminently watchable you can’t help but get the feeling that some of the jigsaw puzzles are missing.

The supporting cast and Ashton Kutchers performance is commendable. Against all odds, he is done a very commendable Jobs (pun intended) and on the whole, the film is watchable.

www.twitter.com/sachinchatte
Posted by Sachin Chatte at 11:15