Film Review - Once Upon a Time in Mumbaai Dobaara 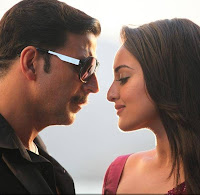 
Basking on the success of Once Upon a Time in Mumbai, we have the sequel and as it has been happening with most sequels, this one is also tepid. The previous film had a decent story and captured the essence of that period but this one just gives a sense of déjà vu. Similar characters and some very heavy duty dialogues doesn’t help the cause but more over, it is the insipid story that is a let down.


The triangular love story of ek phool do maali has been done to death in Bollywood. Instead of two ordinary men, we have two gangsters this time, one of whom is modeled on Dawood.


This film takes off from where the previous one left. Akshay Kumar plays Shoaib a dreaded gangster who has bumped off his mentor. He likes to wear those dark glasses at anytime of the day or night. He takes two young boys under his wing and fast forward 12 years later, he is fixing matches in the Gulf. So much so, that the umpire and two captains have to wait for Shoaib bhai to arrive before conducting the toss.


Hoodwinking the police, he comes back to Mumbai, joins his mistress (Sonali Bendre) and the little boy has grown up to be young man Aslam (Imran Khan) who becomes his protégé. After the tussle with their enemies, the focus shifts on a budding actress Jasmine (Sonakshi Sinha, modeled on Mandakini whose real name is Yasmeen) and going by her behavior, you want to immediately subject her to an I.Q. and psychology test fearing the worst. Apparently, she has moved to Mumbai and gets friendly with both the men with neither of them knowing she is pally with the other. Hell hath no fury like a gangster scorned that is what we learn towards the end.


The writing is lame and the characterization is no better. While Akshay Kumar adds some credibility to his, there is nothing that you feel for the younger pair. Imran Khan looks a bit too suave to plays his role and Jasmine’s character has to be the dumbest you have seen in a long time. Besides, what is the point in showing a real gangster with some degree of sympathy?


The vintage style of background score is impressive for most parts and the production values are in sync with the times. Now only if the story was not so outdated, we would have had a better time at the movies, dobaara.