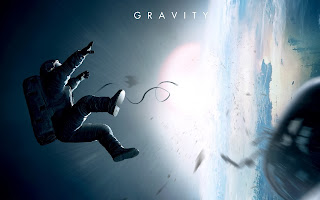 It is only once in a blue moon that you get to see a film that uses technology and story telling to such great effect and great is not word one would like to use loosely. Right from the first scene to the absolute last, Gravity keeps you spell-bound and it is a triumph for director Alfonso Cuaron who already has a few impressive films in his C.V.


While for most films, 3D is more of a curse than a boon, Cuaron has used the technology in his favor and the end result is stunning. Not since Avataar, has 3D been put to such good use (Hugo and Life of Pi also deserve a mention).


For those who don’t know anything about Gravity, it might come as a slight surprise that there are only two characters in the whole film. It opens with one of the most remarkable shots in cinema an 18 minute continuous take up there in space. Dr. Ryan Stone (Sandra Bullock) and Matt Kowalski (George Clooney) are doing some routine maintenance on the Hubble telescope. There is a third astronaut assisting them as well, his name is Sharif and he must be an Indian because he is heard singing Mera joota hain Japani.


“You have to admit one thing; you can’t beat the view” says Matt before all hell breaks loose. The debris from a Russian satellite comes hurling sending them running for cover and resulting in a catastrophic situation. Matt and the lady are left to fend for themselves with very little resources as they hardly get a chance to say Houston we have a problem.

And we know, in space, no matter how loud, no one can hear you scream.

Even though a large part of the film is about her endeavor, you don’t feel the lack of characters one bit because the space and the vast emptiness more than makes up for human characters. By transforming you up there, you are also in a different zone altogether.

Technically, the film is a superior effort. Note the shot where the camera comes close to Sandra Bullocks face, goes into the helmet she is wearing and comes out of it seamlessly making you wonder how on earth they managed that.

From a science point of view, you might find a couple of aberrations but as a film, there are hardly any.

George Clooney has a relatively small role to play but yet he makes his presence felt. Sandra Bullock already has an Oscar on her mantelpiece but I won’t be surprised if she is nominated for her extraordinary performance here. For trivia buffs, Ed Harris’ voice can be heard from the mission control at Houston.

Here’s a film strongly recommended to be watched in 3D, don’t miss it.