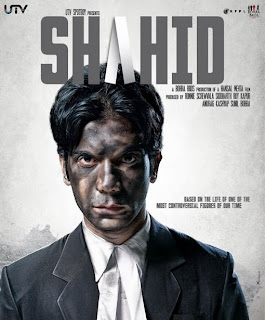 Based on the life of lawyer/activist Shahid Azmi, this film directed by Hansal Mehta is remarkable for the story and the treatment. Real life stories or serious issues are rarely highlighted in Hindi films hence this effort is all the more commendable also because it is made with sincerity and dares to trod the uncommon path.

Since the 90's there has been a huge polarisation within the communities in India.  The have been bomb blasts and terrorist attacks but in the process of apprehending the culprits, many innocents have also been put behind bars and tortured without getting a fair trial. A young man Shahid (Raj Kumar) is picked up by the police after the '92 Mumbai blasts.

The next thing you know,  he has joined a terror camp across the border but since he doesn't agree with their ideology he escapes from there. Once he is back in Mumbai,  the police apprehend him again,  this time he serves 7 years in prison. But there he is inspired by another gentlemen (Kay Kay Menon) who is also a victim of a crime that is ambiguous. Shahid studies law and as a professional, he takes up cases of those innocent people who have been wrongly accused of terrorist activities.  It is not an easy job for him as he has to tackle many issues- cases go on forever in courts and he also receives death threats for being 'anti national'. He also marries one of his clients (Prabhleen Sandhu) who already had a son and is very liberal in nature.

Rather than the politics, it is Shahid and his dedication to the cause that makes an impact.  The plight of many innocents is aptly high lighted but it also makes you wonder,  in troubled times like these,  what is the best and fair way out in such situations.

Full credit goes to Hansal Mehta and his team for crafting a superior film.  Apart from the screenplay,  it is the acting which deserves an applause. Mohammed Zeeshan Ayub as the brother is a natural born actor and surely we'll see more of him in the days to come. The star though is Raj Kumar Yadav who had delivered one of the best performances of the year.

Shahid deals with issues that concern all of us,  those who are concerned about any such things, should not miss this film.

(Published in The Navhind Times on 20th Oct. 2013)
www.twitter.com/sachinchatte
Posted by Sachin Chatte at 11:25