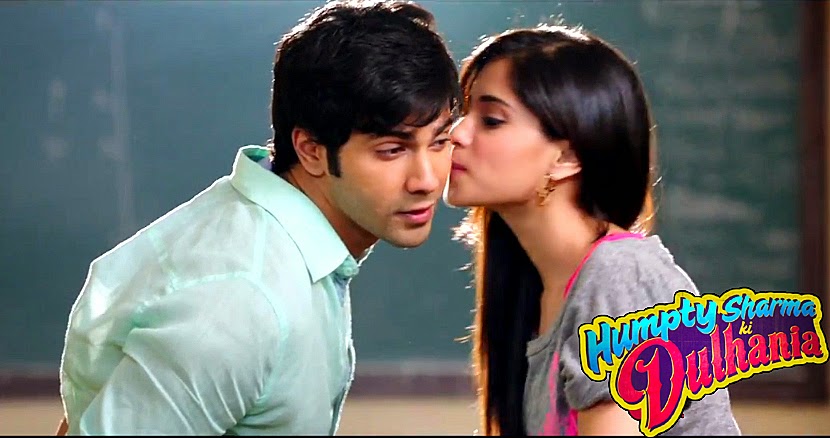 Almost two decades ago, Dilwale Dulhaniya Le Jayenge became the trendsetter and over the years we have had a host of films inspired by that Aditya Chopra film. Topping that list as of today will be Shashank Khaitan’s Humpty Sharma Ki Dulhania, an unabashed tribute to DDLJ.  In one scene, the hero is also seen shedding tears while watching a re-re-run of that film.

The triumph, if one can call it that, of Humpty Sharma lies in the fact that though it uses an oft repeated 20 year old formula & completely throws logic and sense out of the window from the top floor in the latter half, it delivers decent entertainment primarily because the characters are well etched. The chemistry between the lead pair also contributes immensely in pushing the film to the ‘not so bad’ category.

Rakesh aka Humpty Sharma (Varun Dhawan) is a happy go lucky college boy in Delhi who doesn’t particularly excel in anything.  Enter Kavya Pratap Singh (Alia Bhatt) the girl from Ambala who has come to Delhi to shop for her wedding which is on the anvil and she wants to buy a designer lehenga that costs a bomb and Humpty Sharma comes to her rescue. They become good friends and even if you have landed from Mars you would know which way the story is heading.

Back home, Ashutosh Rana plays Amrish Puri’s character. He turns grumpy when the word love is mentioned, his elder daughter was a victim of a love story that went awry. The first half of the film is a breeze and somewhat predictably, it goes downhill after that.

Humpty, with a little help from his friends (Sahil Vaid and Gaurav Pandey),  tries his best to convince the Amrish Puri avatar that he is truly madly and deeply in love with the girl. For the strangest reason in the universe, papa gives him a chance – if he can find a single fault in the prospective NRI groom (Sidharth Shukla), then he will accede to Humpty’s wishes.

Thanks to the sloppy writing in the second half, the film seems much longer than 135
minutes.  A tribute to DDLJ is fine but it doesn’t have to be an unimaginative one. Ultimately, it is the characters that drive the film and a fair amount of laughs are generated by Humpty’s two friends. As a trend in recent times we have seen that the  women character's are not stereotypes and it applies to this film as well- as a larger reflection of the societal issues, the three generations of ladies are seen discussing male issues, in one of the best scenes.

Both Sahil Vaid and Gaurav Pandey fit the bill in those roles and it is also good to see Ashutosh Rana back in action. Varun Dhawan and Alia Bhat are both hitting the right notes since they made their debut and they carry on in the same vein. Of the two, Varun’s performance is marginally better than hers. In sum, Humpty’s bumpy ride is fun in parts.

Published in The Navhind Times on 13th July 2014