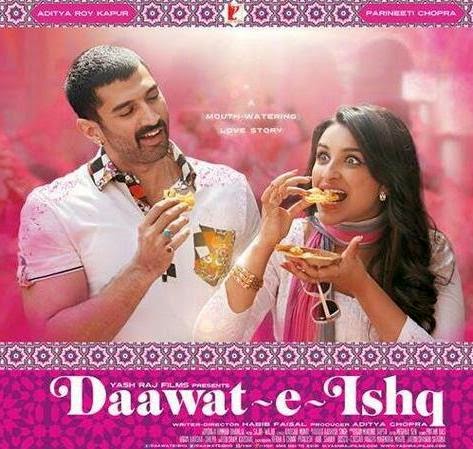 It’s been a mixed bag for writer/ director Habib Faisal so far – his directorial debut Do Dooni Chaar was a delight and he followed it up with yet another endearing film, Band Baajaa Baaraat which he scripted. Bewakoofiyaan was not great shakes and his latest, Daawat-e-Ishq is also in the same mould.

Like in his previous films, he knows how to etch out the characters but when it comes to the situations, there are problems aplenty here.

It starts off with a zing and I was convinced that there are good times ahead. But that was not to be, it was like a sprinter participating in a long distance race. The take off was good but there just wasn’t enough steam after sometime.

Set in the city of Hyderabad, Gulrez (Parineeti Chopra) and her father (Anupam Kher) are living a routine life. She is a salesgirl in a shoe shop and his whole aim is to get her married but the dowry is a big mountain to climb. Several suitors reject her and at times it is the other way round because of the D factor.  So far so good, you are quite relishing the Hyderabadi flavor. But then
in a fit of pique the girl comes up with a rather outrageous plan.  Get married to a rich guy and then file a case against him under section 498A of the IPC claiming harassment and then opt for a settlement. It’s a loony idea to begin with and you can only shake your head in disbelief when the father, a sensible man otherwise, actually accedes to it.

More madness – they have to change their identity, assume new names and move to a new city, Lucknow in this case and book themselves the fanciest suite in a hotel. All so that she can get married to guy and then dump him. Becoming a nuclear physicist might be a relatively easier proposition but the father-daughter duo is busy scheming.

They find a soft target in the form of Tariq (Aditya Roy Kapur) whose family runs one of the most popular restaurants in town. No kebabs for guessing that he turns out to be a soft target who falls in love with her and all that jazz.  The finale at the railway station is in the grand tradition of YRF but you couldn’t care less even if it was in an aeroplane.

For a film that is barely over two hours, there is incredible amount of time that is wasted. There is a song just before the interval and in case you doze off for that one, there is another one immediately after. Also the whole idea of trying to make of social point about dowry is self defeating by the motives of girl and all that talk about section 498A which is dealt without any seriousness.

The acting, especially Parineeti Chopra and the reliable Anupam Kher are the saving grace. While the film has got some of the things right, the fact is that the story is a dud.  I was left hungry, not for food but for a good film.

Published in The Navhind Times on 21st Sept 2014
www.twitter.com/sachinchatte
Posted by Sachin Chatte at 22:13