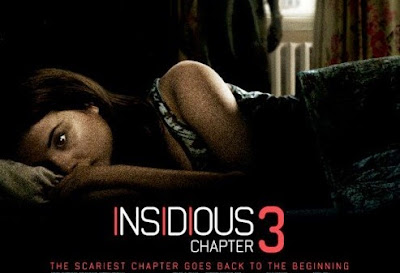 Spirits in a Material World

It is hard to tell one horror film from the other these days, they all revolve around haunted houses or possessed dolls. The only distinction is in the storytelling and director James Wan had done a remarkable job with Insidious (2010) although the sequel had gone slightly off the boil. Wan serves as the producer in Chapter 3 which is just a run of the mill horror film.

This is a prequel, as to what happened before the Lambert family got inflicted. It opens with Quinn (Stefanie Scott), a teenage girl who lives with her father, she wants to contact her dead mother and goes to a meet Elise (Lin Shaye) a specialist who knows how to communicate with the ‘other side’. Right off you know there is a whole load of baloney coming up in this film.

The mother doesn’t make any contact but instead another ghoul is on the prowl. When Quinn gets bed ridden due to an accident, the setting is perfect for the demon to make a move. She can’t move, he enjoys scaring her while you wait for her and your ordeal to end.

Barring one impressive shot where the camera goes back and forth from the window, there is nothing much to write home about in Chapter 3.

There is also a whole load of mumbo jumbo about ghosts, spirits, dark side, the world of spirits (which is referred to as Further).   There is little doubt in my mind that most of the superstitions in the world come from silly films like these.

Published in The Navhind Times on 28th June 2015
www.twitter.com/sachinchatte