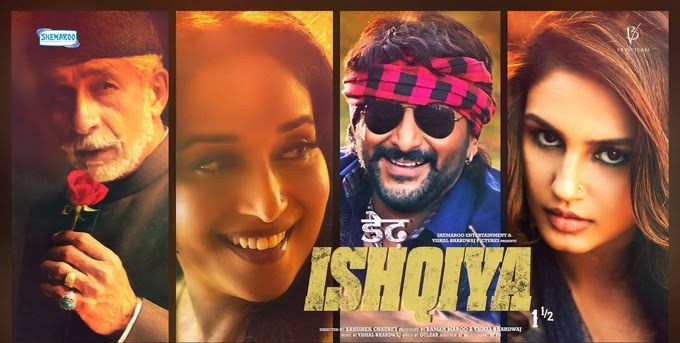 Once in a blue moon you get a film that is delightful, has a good story, excellent dialogues, is very well acted and also very witty - in other words, it has the X factor. During times when, forget the sequel, even the first part of most films is unbearable, Director Abhishek Chaubey who delighted us with Ishqiya (2010) doesn’t disappoint. The surprise element may be missing but be that as it may, Dedh Ishqiya is more than just one and half times better than most of the weekly stuff dished out every Friday.


The devil as they say, lies in the detail and since a lot of attention is paid to it here, it is this element that will enamor you. It has been a while since we saw some chaste Urdu (or Hindustani as it is known in cinema) on the big screen. Darab Farooqui, Vishal Bhardwaj and Abhishek Chaubey have done a marvelous job as far the writing is concerned - the dialogues are seamless, not a single line looks out of place.

Last time around, the lingo was Bhopali but this time, we are in Uttar Pradesh, where Khalujaan (Nasseruddin Shah) and Babban (Arshad Warsi) are back to their antics. After stealing a necklace they part ways only to meet again in Mahmoodabad in Awadh at one of those crumbling mansions where poetry sessions are still the in thing. The host is Begum Paro (Madhuri Dixit) a widow who is looking for a suitor. Her woman Friday is Muniya (Huma Qureshi) who is also in the thick of things and Vijay Raaz plays a politician who is first in the queue to become the Nawab of Mahmoodabad. In one of the many hilarious scenes, he kidnaps a poet curiously called Noor Mohammed Italvi, whose mummy is Italian and father is an Indian.

Love, heartbreak, deception, double crossing – its all there to make up for the second half which includes a shoot out filmed at a fairly deserted railway station, with Begum Akhtar’s Wo jo hum mein tum mein karaar tha playing the background.

And who would have thought that someday we would hear Begum Akhtar (Hamriatariya pe aao is also brilliantly used) and Yo Yo Honey Singh in the same film!

There are some hilarious scenes like the all night stand off between the two warring sides and some funny lines like the one where a U.P. don (Salman Shahid) says “Batman ka naam suna hain? Agar Joker mar gaya to saala Batman kya karega? Ghar baith ke aataa goondega?”  There are evocative scenes as well where the Begum calls Khalu by his name (Ifthekar) and he replies by saying that his first name never sounded so good.

The writers have also pushed the envelope as far as portraying the relationship between the two prime characters is concerned.

Nasseruddin Shah in the costume and the character, reminds you of another role that he essayed, Mirza Ghalib. Needless to say, his performance is solid. After last weeks disastrous Mr.Joe B.Carvalho, it is such a relief to see Arshad Warsi do a role where he can truly showcase his talent. Vijay Raaz as the desperate lover is perfect for a few laughs. Like their counterparts, the ladies also have delivered what is expected. Madhuri Dixit’s as the dignified widow is apt and a feisty Huma Qureshi shows that she is a powerhouse when it comes to talent.

Dedh Ishqiya is sight for sore eyes. Go for it.

Published in The Navhind Times on 12th Jan 2014
www.twitter.com/sachinchatte
Posted by Sachin Chatte at 22:00