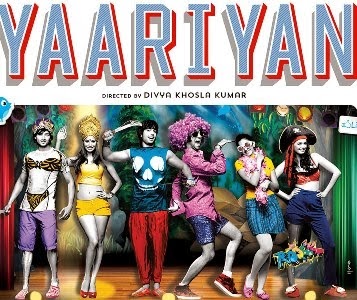 The Worst Students Of The Year

If you ask a seven year old kid to tell a story they will surely come up something better than Yaariyan. This film is an insult to anyone who has something that even remotely resembles intelligence. Meant to be a Gen Next story it is so silly that it makes you laugh, unintentionally.

Debutante director Divya Khosla Kumar tries to do a student of the year, in this case with a tinge of patriotism because these bunch of kids have to beat the Australians at rock music, rock climbing, bike racing, chess and other assorted tom foolery.

So there is this school in Sikkim wear the girls wear clothes that would make the Baywatch girls look over dressed. Himansh Kohli plays Lakshya who is desperate to kiss a girl. Defying all the laws of physics, he even once saves a pussy cat on top of a building and that impresses the Principal Jim Martin (Gulshan Grover) a lot.

When the school is in trouble because of an Australian tycoon, the principal summons his best students to compete with the Aussies. There is a brainy girl Saloni (Rakul Preet Singh), “Uski memory computer se bhi zyaada tez hain” says the principal. So this bunch of guys and girls go to Australia to participate and they even sing a song that starts during day time and ends at night. No wonder everyone looked exasperated. But they don’t win a prize because it’s a Hindi song and hence it cannot be rock.

The story is regressive, silly and just about everything in the film looks fake, including the acting. The only one I felt sorry for was Deepti Naval. Surely, she deserves better than this. And so do we.

Published in The Navhind Times on 12th Jan 2014
www.twitter.com/sachinchatte