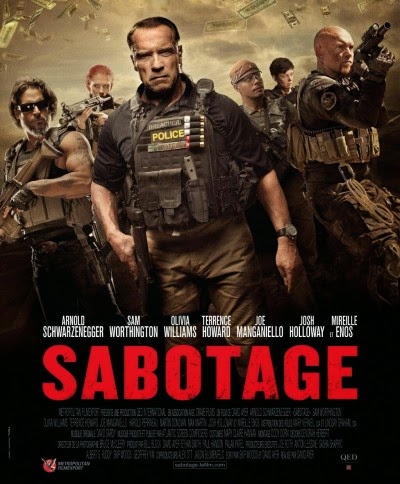 While both are thrillers, this Schwarzenegger starrer has nothing to do with the Hitchcock film of 1936 which was based on the Joseph Conrad novel. Directed by David Ayer Sabotage turns out to be one of those average action thrillers with a premise that had the potential to become a gripping film. Instead, the pedestrian screenplay and the not-so-inspiring direction makes it a passable flick.

Schwarzenegger plays John ‘Breacher’ the leader of an elite Drug Enforcement Agency task force who is carrying some emotional baggage from the past. He along with his other team members are able and ruthless professionals who are investigated after $10 million dollars go missing after a raid. One of his colleagues gets killed by a ramming train and that starts the chain of deaths among those who were involved in the raid.

Sam Worthington (of Avatar fame) is James ‘Monster’ Murray, a tonsured angry young man who is married to Lizzy (Mireille Enos), both are close friends of the leader of the pack. One by one, they start getting killed in the goriest fashion and when the ‘suspense’ is revealed, it doesn’t come as a big surprise.

The way some of the scenes are shot, especially the handheld ones, there is an attempt in vain to make it look intense when actually it is not. At times, you get the sense the film makers were trying to be too clever, like the shot where the camera is rigged on the gun.

There is plenty of violence to boot and it is not as if the script demands it. Some of the action scenes in the finale are well executed but pray what is our censor board upto? I’ve never seen a film that has an A certificate and yet so many swear words are beeped out. At times, there are long passages of silence in the middle of a sentence.

Schwarzenegger as the cigar chomping boss gives a gutsy performance but otherwise Sabotage has little going for it.
Posted by Sachin Chatte at 10:57