Film Review - Margarita With a Straw 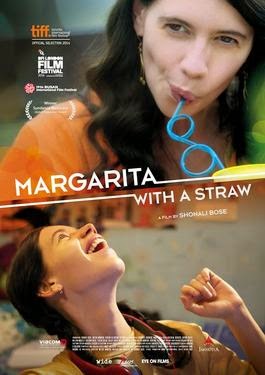 Directed by Shonali Bose, Margarita With a Straw is a rare film that deals talks about self discovery with sensibility and sensitivity. No wonder the film won a couple of awards at international festivals including one at Toronto.

While the story is well told, a great deal of the credit for pulling it off should also go to the lead actress Kalki Koechlin who has delivered a knockout performance in the lead role.

The film revolves around Laila (Kalki), who has cerebral palsy. While her doting mother (Revathy, reliable as always) looks after her, among other things, the young woman is also discovering her sexuality.

She has a crush on the singer of her college band but that matter doesn’t progress much. She gets a scholarship in New York where she meets Khanum (Sayani Gupta) and part of the film delves on their relationship.

The screenplay brings out the emotions without being sloppily sentimental and that is the biggest achievement. Usually films dealing with characters that have special needs tend to go over the top but this one driven more by the character rather then what her needs are. That is not to say that it doesn’t bring out the compassion, it does.

The acting is from the top draw, along with Kalki, Sayani Gupta and Revathy fit the bill.

With a story that comes straight from the heart, Margarita With a Straw is eminently worth a watch.

Published in The Navhind Times on 19th April 2015
www.twitter.com/sachinchatte
Posted by Sachin Chatte at 12:16