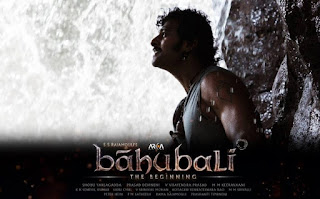 Bahubali is a magnum opus from S.S. Rajamouli, the director who has given us films like Magadeheera and Eega (which was dubbed in Hindi as Makhhi). It is an ambitious film made on a grand scale and that is the most admirable part. This is perhaps the film where special effects have been used to such a great extent and in such an effective manner in Indian cinema. The basic plotline is a familiar one, this is a revenge saga set during a time when kings and queens ruled from the magnificent palaces. But as it progresses, we discover that there is more to it than just a revenge saga.

The names and places sound straight out of an Amar Chitra Katha comic book. In an impressive opening sequence a baby is smuggled out from the Kingdom of Mahishmati. He grows up to become Shiva (Prabhas) and eventually Bahubali, the man who will set right all the wrongs.

Instead of moving to the next gear it goes into reverse when he sees Avantika (Tamanaah of Himmatwala redux fame) and falls in love with her after seeing her swordwomanship. He is also keen to show off his own of skills and after a bit of fore and sword play, they are in love.

The one doing the most wrong is Bhallala (Rana Daguubati) the king who shows no mercy and has kept a woman in captive who turns out to be Shiva’s mother. Like Rakhee in Karan Arjun, she is hopeful that someday her son will come and rescue her.

The story picks up steam in the second half when via a flashback we are told that what transpired in the Kingdom once upon a time long long ago. Veteran actor Nasser plays a Shakuni mama kind of a character with similar mannerisms. The finale is a battle scene between the warriors of Mahishmati and a bunch of primitive looking people. Even though it is a bit extended, fair to say it is quite riveting and admirable the way it has been shot.

Rajamouli clearly has an eye for strong visuals, take the rain soaked action scene for instance, there is some terrific style on display there. Where he falters is when he decides to go by book and does something commonplace like item numbers.

We would love to see what he has to say and show rather than, what the audience presumably wants to see.

There isn’t much to harp about the cast, they are passable. With a running time of over two and a half hours, there is considerable flab that needs trimming. But all said and seen, the positives outweigh the negatives. And it is the kind of film that goes well with a lot of popcorn.

Published in The Navhind Times on 12th July 2015
www.twitter.com/sachinchatte