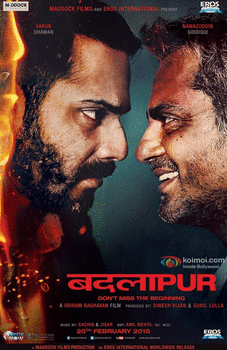 Revenge maybe a dish best served cold but as Friedrich Nietzsche rightly says in Beyond Good and Evil, “Anyone who fights with monsters should take care that he does not in the process become a monster. And if you gaze for long into an abyss, the abyss gazes also into you.”


From the director who made Johnny Gaddar (2007) one of the greatest thrillers ever in the history of cinema, Badlapur is a return to form for Sriram Raghavan,  after the disappointing Agent Vinod. Raghvan’s forte is engaging the audience with the proceedings, the way he has crafted the characters and added twists and turns to the story, it could easily go on for another couple of hours and you would still be engrossed with his story telling.


Based on the story by Italian writer Massimo Carlotto, essentially, Badlapur as the title suggests, is a story of revenge. With a Raghavan film, you have to pay attention to the details right from the opening credits. If Johnny Gaddar was a tribute to James Hadley Chase and Vijay Anand, there is a ‘thank you’ to Don Siegel, the director of Dirty Harry (1971) here.


The tag line of Badlapur says ‘Don’t miss the beginning’ and rightly so. The first 15 minutes are as gripping as it can get. From the camera placed across a not particularly busy street in Pune we see some ordinary goings- on. A vendor selling fruits, cops’ trying to tow away a vehicle – the camera is static capturing the mundane proceedings but you know something is going to give in. A bank robbery goes wrong resulting in a tragedy, shots are fired, a woman and a kid end up dead. Only the audience and one of the two who is responsible for the death know who it is. One of them, Liak (Nawazuddin Siddiqui) is taken into custody claiming he is innocent and it was the other man who was responsible. Raghu (Varun Dhawan), the grieving husband and father meanwhile can’t overcome the deaths and seeks revenge. He is ready to wait as long as it takes to settle scores with those who were responsible.


The screenplay never lets you guess which way the story is heading and just when you think it has reached a dead-end, a new path opens up. The finale takes off on a different tangent altogether and though it may not be a very traditional climax in a sense it makes some points about morality by turning the story on its head. After all, there is no such thing as moral phenomena, but only a moral interpretation of phenomena.


The characters are fascinating – primarily it revolves around Raghu a sober ad executive who runs amok and Liak, the shrewd villain of the piece. In fact, Liak reminded me a lot the Joker, as far as a large part of his characterization is concerned - he is menacing, calculative and couldn’t care less. The others are also equally absorbing, Huma Qureshi as prostitute, Divya Dutta as a social worker, Vinay Pathak as the partner in crime and Radhika Apte as his wife all add to the conundrum.


Anil Mehta’s cinematography is from the top draw and on the acting front, Varun Dhawan makes an impression in a serious role and Nawazuddin Siddiqui steals the show again with his savior faire.


Badlapur is streets ahead of the rest and hence deserves a look.

Published in The Navhind Times, Goa on 22nd February 2015
www.twitter.com/sachinchatte