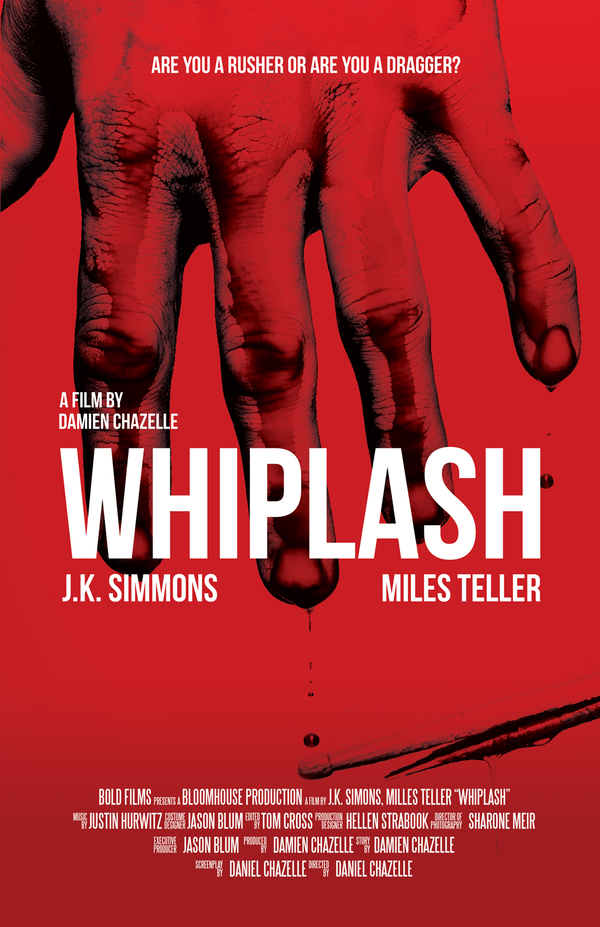 Based on his short film, director Damien Chazelle has expanded Whiplash into a full length feature. To put it plainly, this is an extraordinary film. In terms of the basic story of a student-teacher relationship it not only has a slightly different arc but it is the execution and all the other elements, acting, direction, music, editing which make Whiplash an exhilarating cinematic experience of the highest order.

When you step out of the theatre after a stupendous climax, you might even feel that you are floating in the air, like Birdman.

So what makes Whiplash so special? One word to describe it would be intensity. This is TNT packed in a can.

Through a dark corridor, we see a young man picking the sticks getting ready to play the drums. The camera starts moving towards him, slowly as he lets himself loose on the drum set. The young man in question is Andrew (Miles Teller), who in the middle of it all suddenly realizes that a senior teacher is watching him. The teacher is Fletcher (Simmons) who turns out to be the hardest task master you can imagine. Not only is a highly disciplined but one mistake and you are roasted in front of everyone. So much so that a young man literally wets his pants on being scorned by Fletcher.

Andrew is a loner of sorts – occasionally he spends time with his father (they go to the cinema to watch Rififi, one of the greatest heist movies). He fancies a girl (Melissa Benoist) working at the cinema but his first love still remains drumming.

He gets the odd chance to perform for Fletchers band but it is not easy dealing with the man. Large part of the film delves on the two – while the young man is ambitious, talented and hardworking, is that enough to make the cut?

Writer / director Chazelle also focuses on the fact that how much one should or can push himself and others to take them to the next level? It could well end in the student turning out the next big sensation or it could end in a tragedy.

There have been films about teacher- student relationships but they are mostly the goody-goody ones where the former inspires the latter and brings out the best in them. But Fletcher is one sadist you don’t want to mess around with.

The film builds the tension and winds up on a high – the music score is in overdrive and even the manner in which the music is shot throughout the film is terrific.

The two lead actors contribute immensely – Miles Tellis as the young protégé literally spilled blood while playing the drums and more importantly he conveys the vulnerability of his character with conviction. As for J.K Simmons (recognizable as Peter Parkers boss in Spiderman), he has given a performance of a lifetime. As the Best Supporting Actor, the Oscar award is his for the taking.

Published in The Navhind Times, Goa on 22nd February 2015
www.twitter.com/sachinchatte
Posted by Sachin Chatte at 12:26