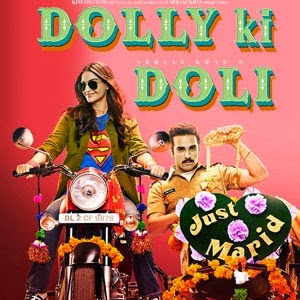 There aren’t too many films that rest on such a flimsy premise, have very little logic and yet are pleasant, like the cool evening breeze, Dolly Ki Doli directed by debutant Abhishek Dogra  is one of those. One of the reasons for that is the duration, at a little over an hour and a half,

Dolly’s tale moves at a fairly reasonable pace speed without too much extra baggage.
The plot has similarities to Daawat-E-Ishq but while the Yashraj production got all bogged down by with the serious nature with which it approached the subject, Dolly Ki Doli has a smooth sailing.

The film gets on with it right from the word go - Dolly (Sonam Kapoor) is a professional con woman who entraps men, marries them and with the blink of an eye, she disappears after cleaning the up the valuables of the in-laws. She has a whole ‘family’ in place as a part of her team which includes a fake father (Manoj Joshi), mother and brother (Mohd. Zeeshan Ayub).

Sonu (Rajkummar Rao) a sugar cane farmer from Haryana is truly madly and deeply in love with her becomes one of her victims followed by Manjot (Varun Sharma of Fukrey fame) who goes against his mummy’s (Archana Puran Singh) wishes to marry her. Hot on the trail of the gang is a cop (Pulkit Samrat) who is interested in Dolly for professional and personal reasons.

There are plenty of fun moments when the proceedings are lightweight and don’t take themselves seriously. In this day and age, it is not only improbable but impossible for a bride not to be photographed during the whole wedding ceremony. You have to swallow this and some other oddities and once you do that, it is quite enjoyable till it gets all serious in the climax.

Even though the film centers around Dolly, the star of the show is Rajkummar Yadav who steals every scene that he is present in. Varun Sharma is also spot on as far as his character is concerned and Sonam Kapoor is likable.

For long I have believed that our films would make for much better viewing experience if they are restricted to two hours or under even if the script has flaws. Dolly Ki Doli shows that the theory also works in practice.

Published in The Navhind Times on 25th January 2015
www.twitter.com/sachinchatte